President of the Republic of Azerbaijan Ilham Aliyev attended a ceremony to launch the “Academician Khoshbakht Yusifzade” tanker built at Baku Shipyard by the order of the “Azerbaijan Caspian Shipping” Closed Joint-Stock Company on December 7.

President Ilham Aliyev: Hello. Nice to meet you. I made this decision about three years ago, and the ship is now ready.

Academician Khoshbakht Yusifzade: Yes, it is!

The head of state was informed that the “Academician Khoshbakht Yusifzade” tanker with a carrying capacity of 7,800 tons measures 141 meters in length and 16.9 meters in width. The permanent crew of the tanker consists of 15 people.

The new tanker is the third of four tankers built at Baku Shipyard.

Khoshbakht Yusifzade: Look how many balloons there are!

President Ilham Aliyev: In your honor. Almost three years ago, we celebrated your birthday anniversary.

Khoshbakht Yusifzade: It has been about three years, not much left.

President Ilham Aliyev: It was January 2020, the anniversary event.

Khoshbakht Yusifzade: On 14 January. A month or two is left for three years.

President Ilham Aliyev: It is one month away.

Khoshbakht Yusifzade: One and a half months.

Khoshbakht Yusifzade: You see, I have dedicated my entire life to the sea. I am very grateful to you. Dear Mr. President, you have really shown how much you value me. This is an incredible gift. It is a testament to your respect not only for me, but also for all oil workers. In general, you worked alongside us for 10 years back then. Even after you become President, your attention to us is still there. All our achievements are associated with you. You are proud of everyone and are paying attention to us.

Let me also tell you that after Mr. Heydar Aliyev became the leader of Azerbaijan in 1969, he took interest in all fields. He was interested in every sphere, including our oil workers. At that time, deposits were discovered in all areas with a water depth of 40 meters, but the shipping company had no ships. He quickly bought more than 400 ships, crane barges and cargo vessels. All of these made it possible to discover Azeri, Chirag and Gunashli, the fields now famous all over the world. Indeed, Mr. Heydar Aliyev seemed to see the future several years ahead. He really did a lot.

Thank you very much. You have done a tremendous job. It is one of my happiest days today. I could expect anything, but to have a ship named after me – by God, I could not even dream of that ever happening.

President Ilham Aliyev: This is only fair.

Khoshbakht Yusifzade: And it is a tanker. The thing is, you know, I have been on board of almost every vessel, including a tanker. Because it was impossible to get away on another ship in windy weather. We used tankers to do that. Dear Mr. President, if we were to compare the human body to the oil industry, shipping would be its legs. Without shipping, we could do nothing at sea. Whatever we have discovered at sea, whatever we have done and whatever we are doing, all these are related to shipping. Because we couldn't do anything in the water without this. The difference between this and other types of shipping, maritime shipping, is that the latter go directly from one port to another, but this one goes out to the open sea and can approach platforms. Therefore, I would like to express my gratitude to all of you, to this entire team. This is a huge job.

What else can I say? Again, this is one of my happiest days. How can I thank you, how can I ever express my gratitude?

President Ilham Aliyev: Thank you, Mr. Yusifzade. You mentioned the contributions of Heydar Aliyev. In the 1970s, a new era of Azerbaijan's oil industry began, and you remember those days quite vividly as someone who was involved in that work. As a result of Heydar Aliyev's initiative, a new impetus was given to the development of oil and gas fields in the Caspian Sea in Azerbaijan. Among those things, as you remember very well, it was on Heydar Aliyev's initiative and, I would even say, on his insistence that the Deep Water Jackets Factory was built. It was originally expected to be built in Astrakhan, but when he found out about that, he appealed to the senior officials of the Soviet government and proved that the most suitable place for the construction of the Deep Water Jackets Factory was Baku, Azerbaijan. Why? Because Baku was the center of the entire oil and gas industry of the Caspian Sea, and he succeeded.

You may also remember how important it was to have this Deep Water Jackets Factory here when we started working on the Contract of the Century. Because if it hadn’t been for this factory, the execution of all our contracts could have delayed by 5-10 years perhaps. So he did it at the right time, and during the years of independence, as people implementing Heydar Aliyev's oil strategy, we worked together with you and other associates on the Contract of the Century. We always remember those days. The foundation of today's developing and strengthening Azerbaijan was laid back then. If that contract had not been signed, we would not have had any revenues. Where there are no revenues, there can be no talk of any development.

Today, we are creating new transport infrastructure facilities, very much in line with the policy of the Great Leader. The foundation for the creation of this tanker was laid with the commissioning of a shipyard nine years ago. I made that decision and we achieved it. At that time, some people thought it was not necessary because we were buying ships and tankers from other countries. But I knew that it would be of great importance. Now we do not depend on anyone. We have both a professional team and experience. Therefore, all construction work here is carried out by local specialists. We can build several tankers, bulk carriers, Ro-Ro ships, and ferries every year. I think it is only fair that this ship is named after you. This is a rare and perhaps even a unique situation when a ship is named after a person during his lifetime. But this is only fair. You know that I have great respect for you – as a specialist, as a legendary oil worker and as a wonderful person. The fact that you are here with us today inspires many people that even at this age a person can be as cheerful. You are in good health and inspire us all to do better things with your optimism. Congratulations, Mr. Yusifzade.

Khoshbakht Yusifzade: Thank you very much.

President Ilham Aliyev: I said at the anniversary event that we would inaugurate this tanker together. This day has come.

Khoshbakht Yusifzade: You have done such a lot. Also, it is indeed a great honor for all of us here that you are taking part in the commissioning of the tanker. We all express our gratitude to you. Thank you very much.

Khoshbakht Yusifzade: I am cutting the ribbon together with the President. Can this ever be forgotten?

Then President Ilham Aliyev and Academician Khoshbakht Yusifzade cut the ribbon as a symbol of commissioning the tanker.

President of Azerbaijan Ilham Aliyev attended on December 7 a ceremony to launch the “Academician Khoshbakht Yusifzade” tanker built at Baku Shipyard by the order of the “Azerbaijan Caspian Shipping” Closed Joint-Stock Company (ASCO).

Chairman of the ASCO Rauf Valiyev informed the head of state of the next-generation tanker, Caliber.Az reports, citing the president's press service.

The news will be updated. 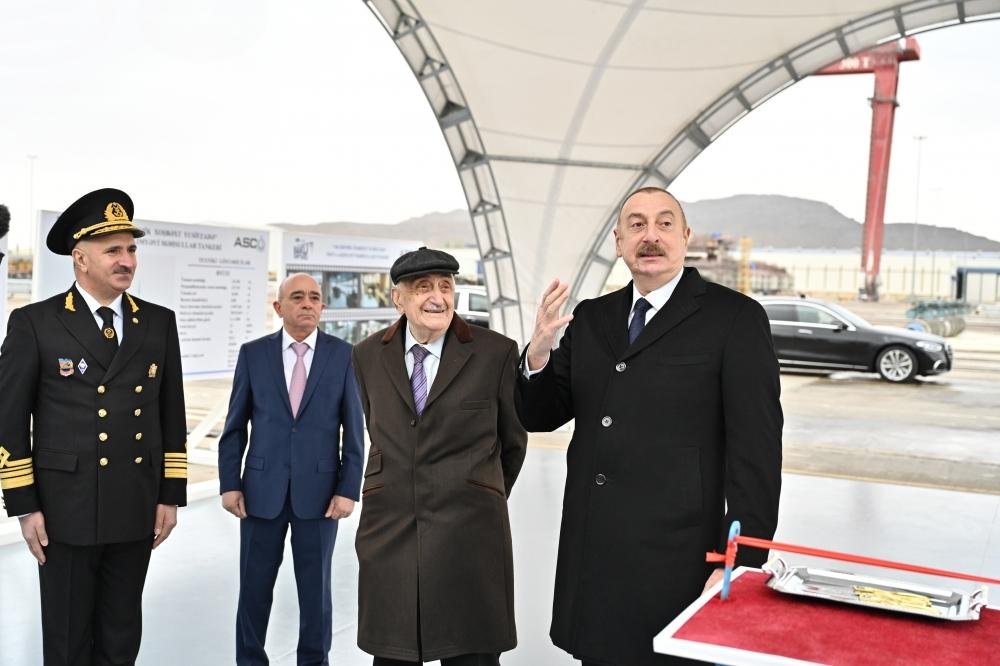 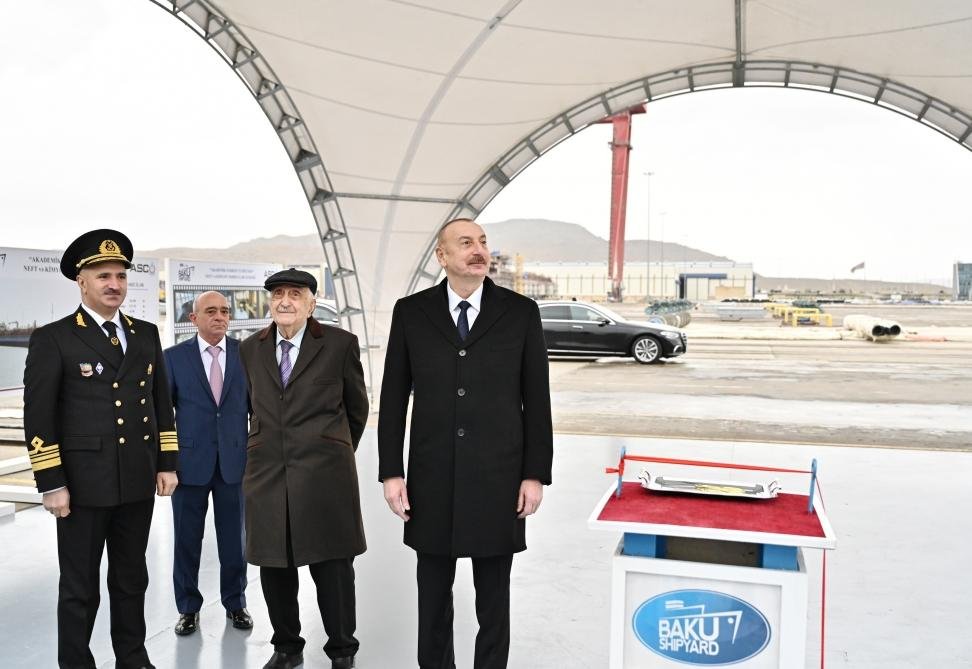 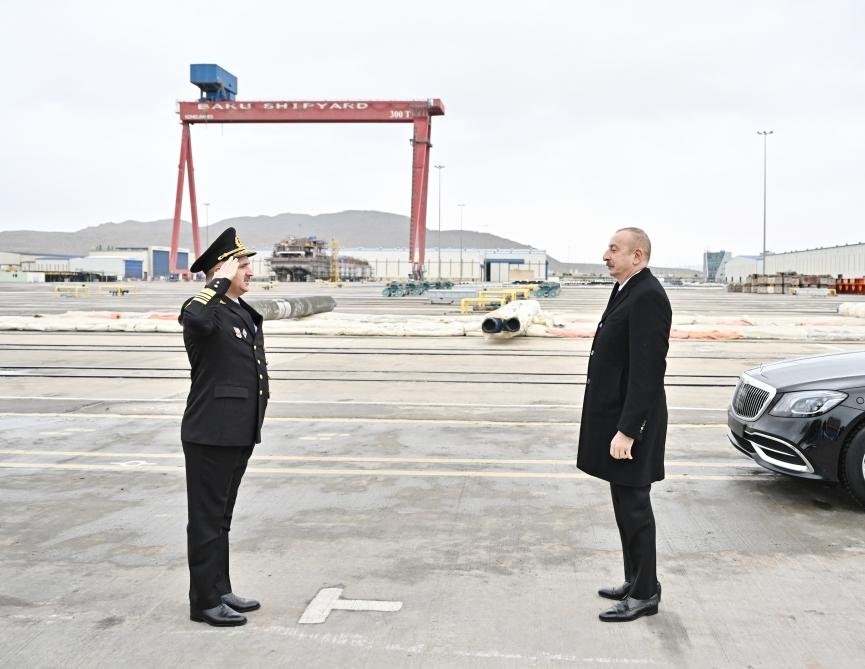 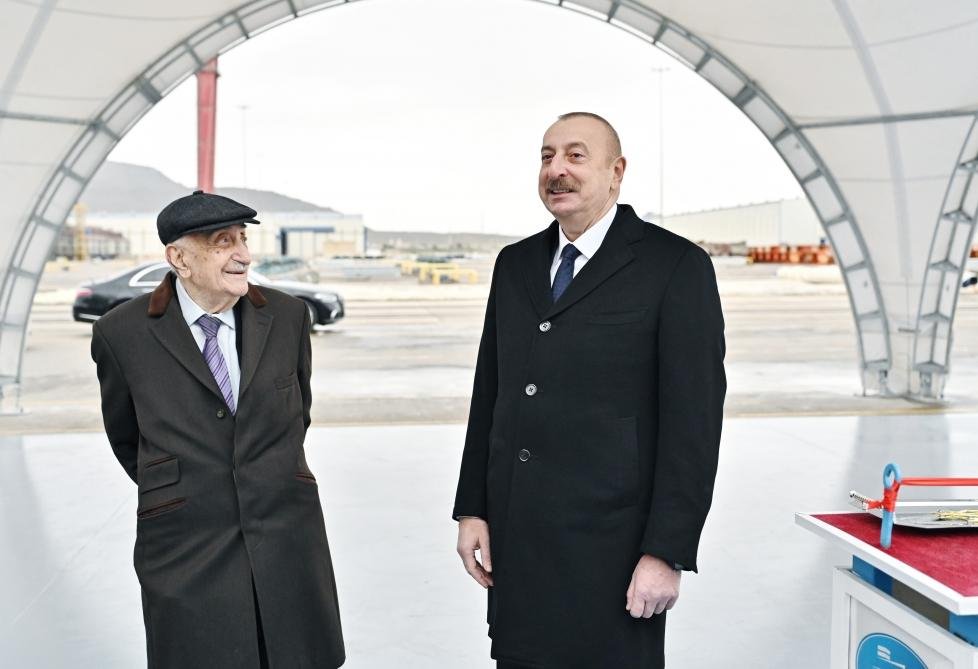 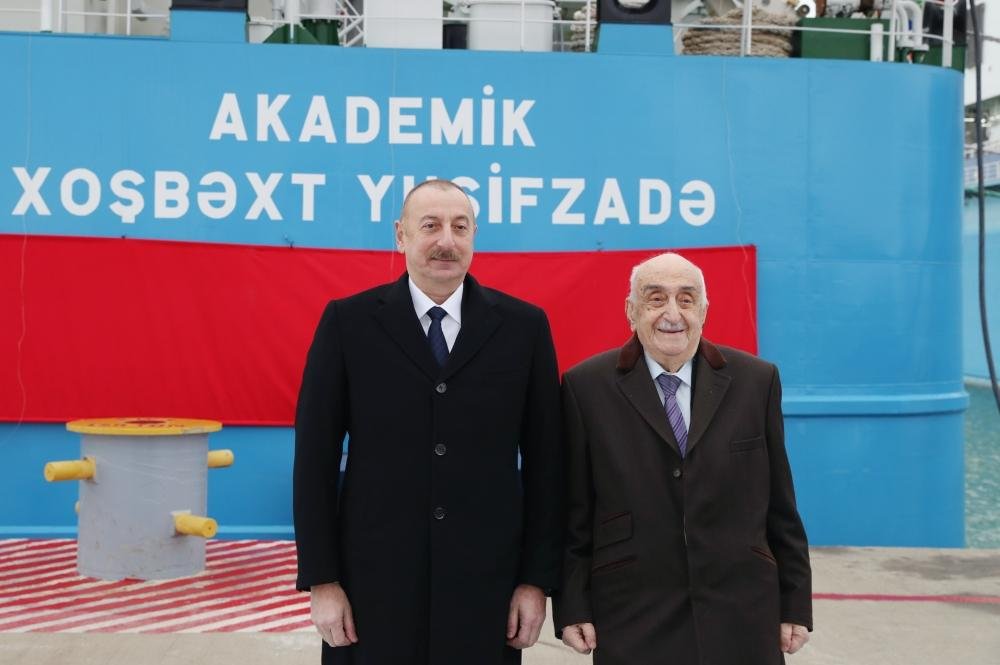 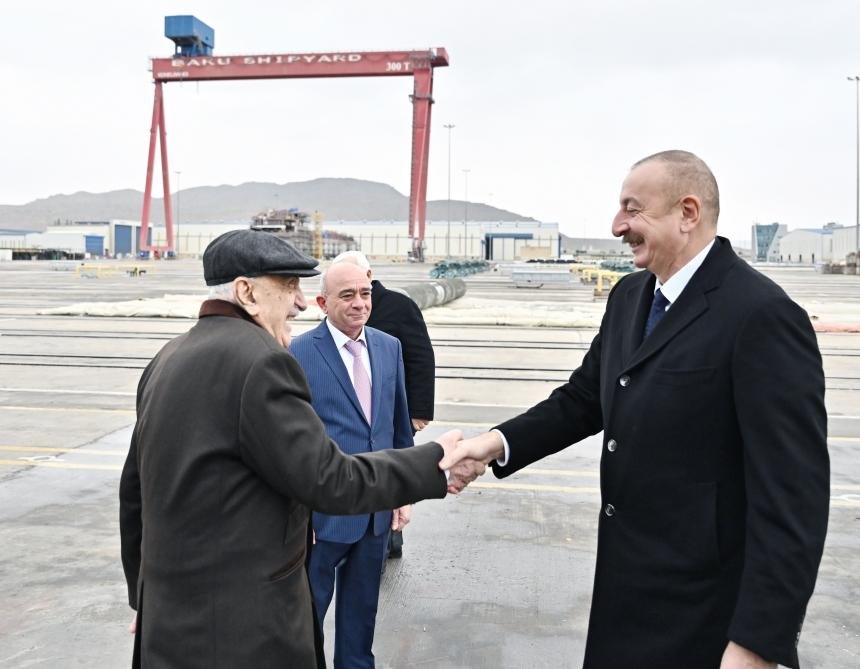 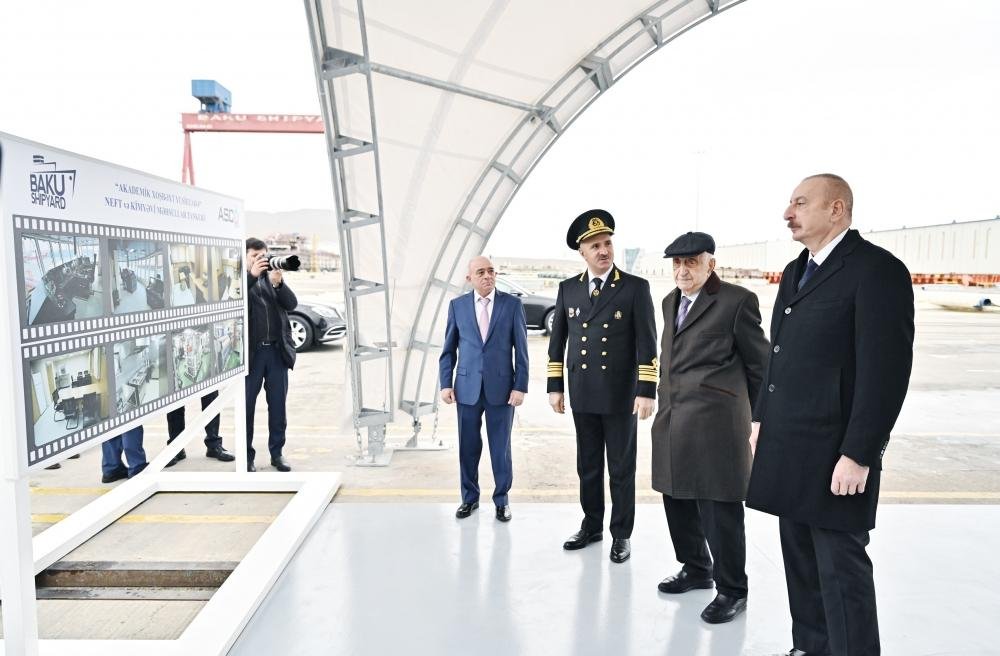 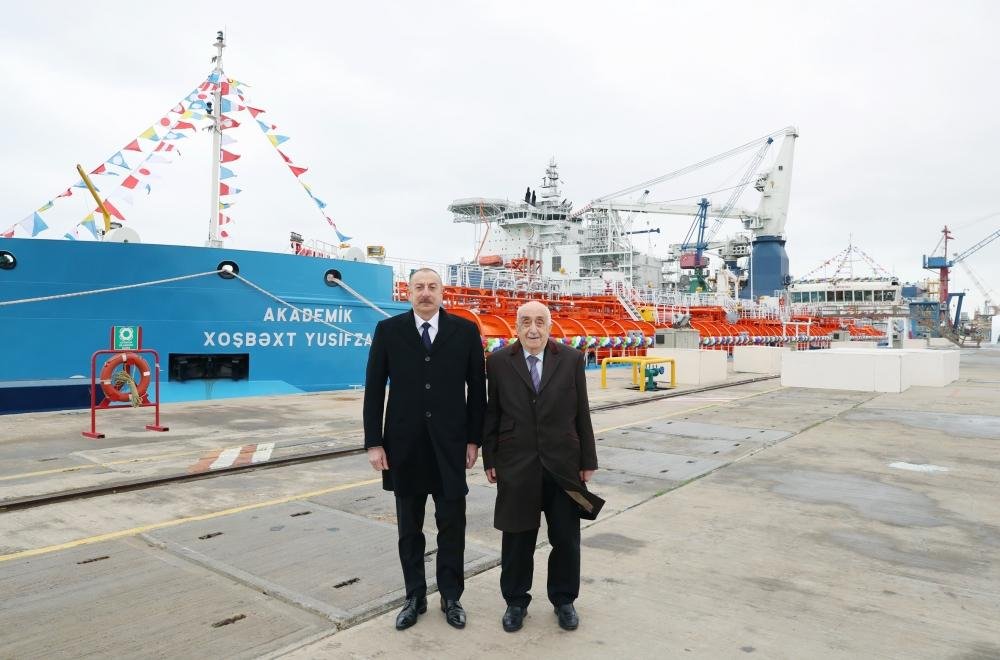 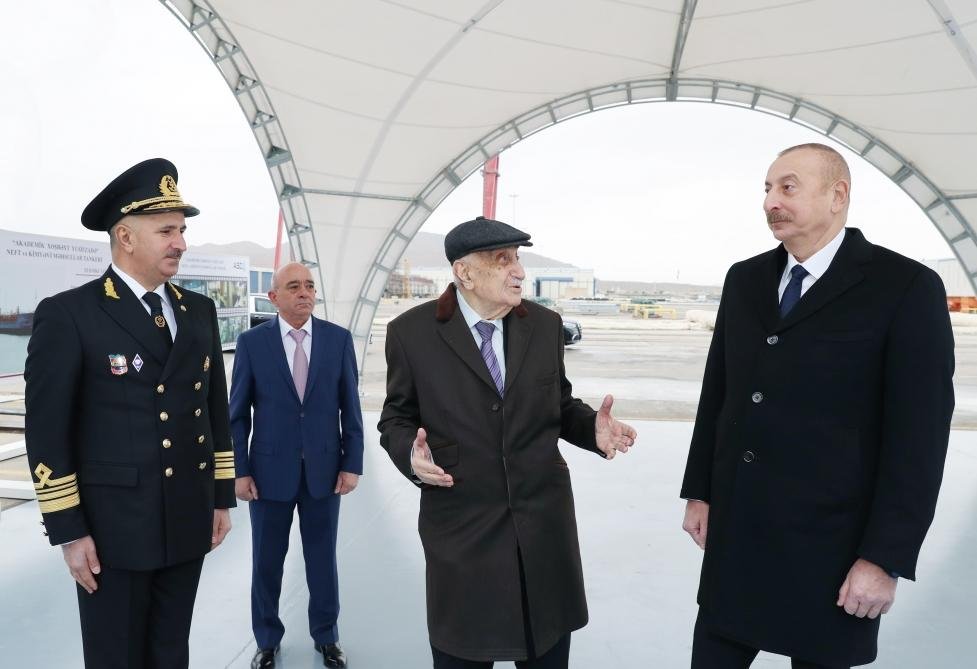 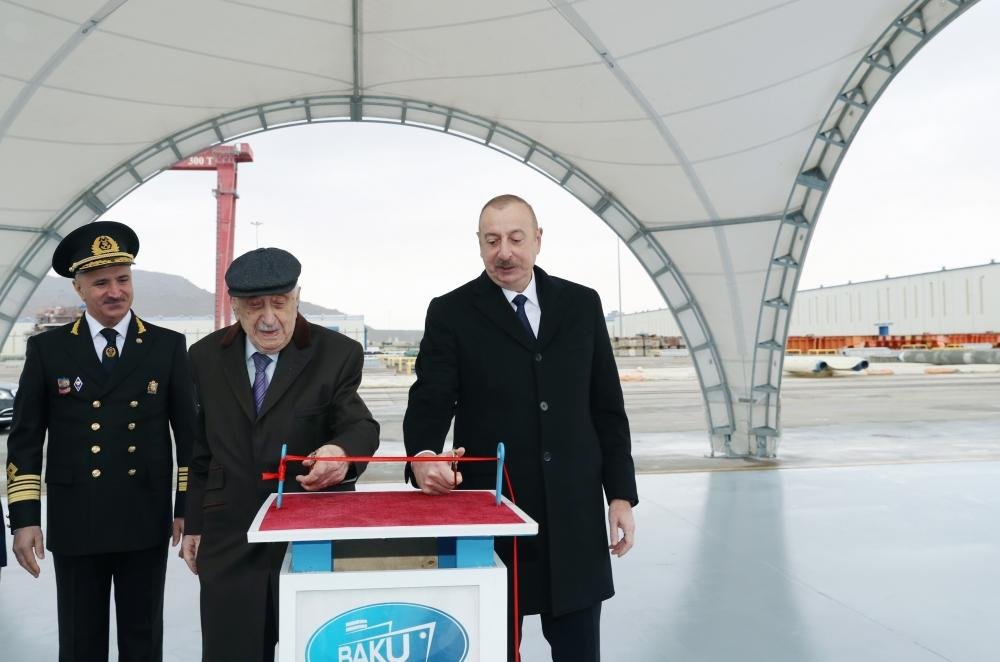 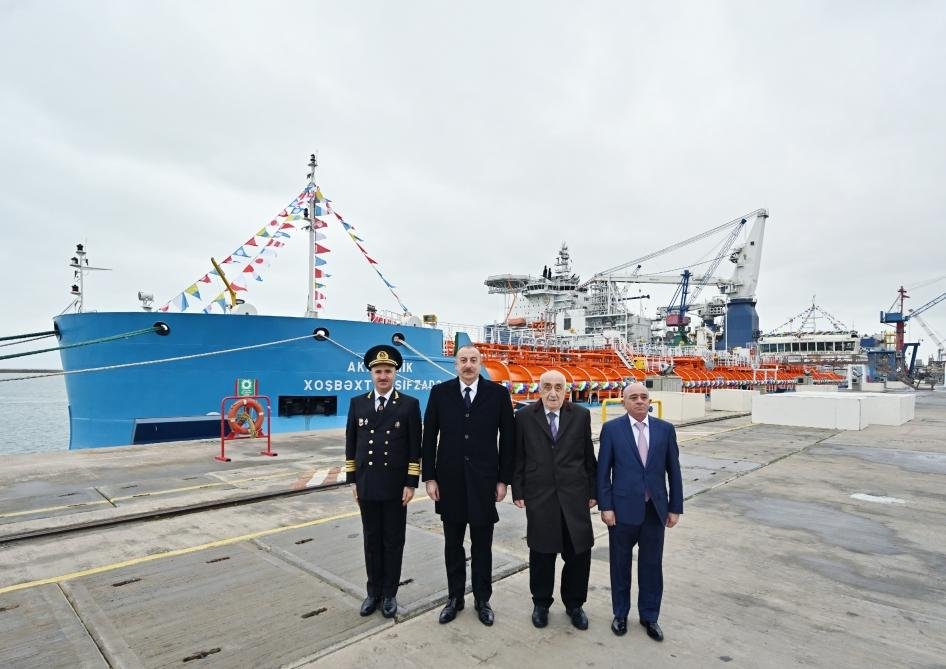 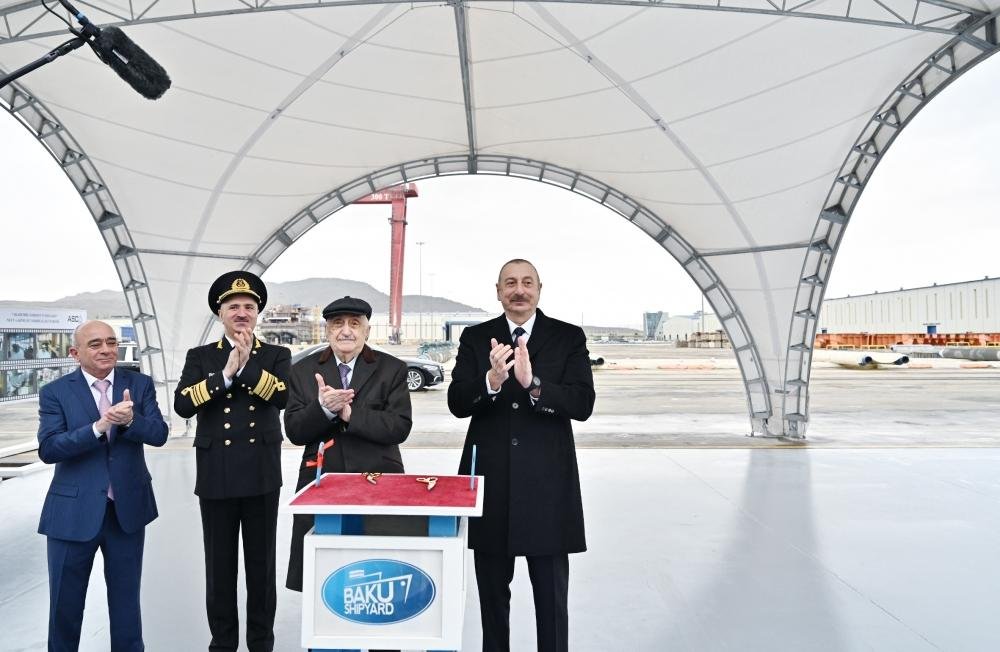 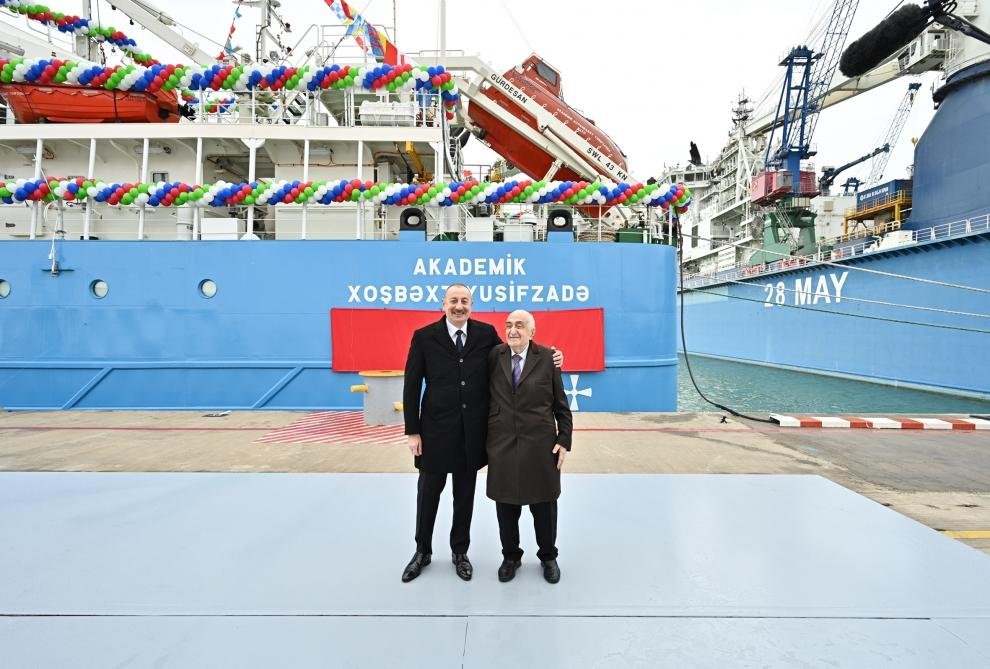 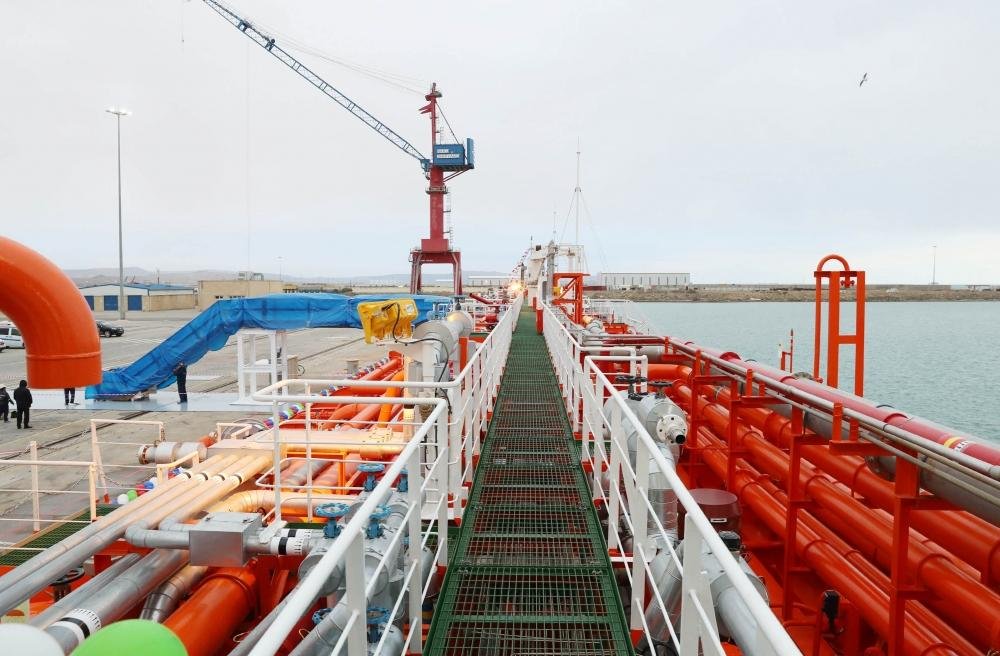 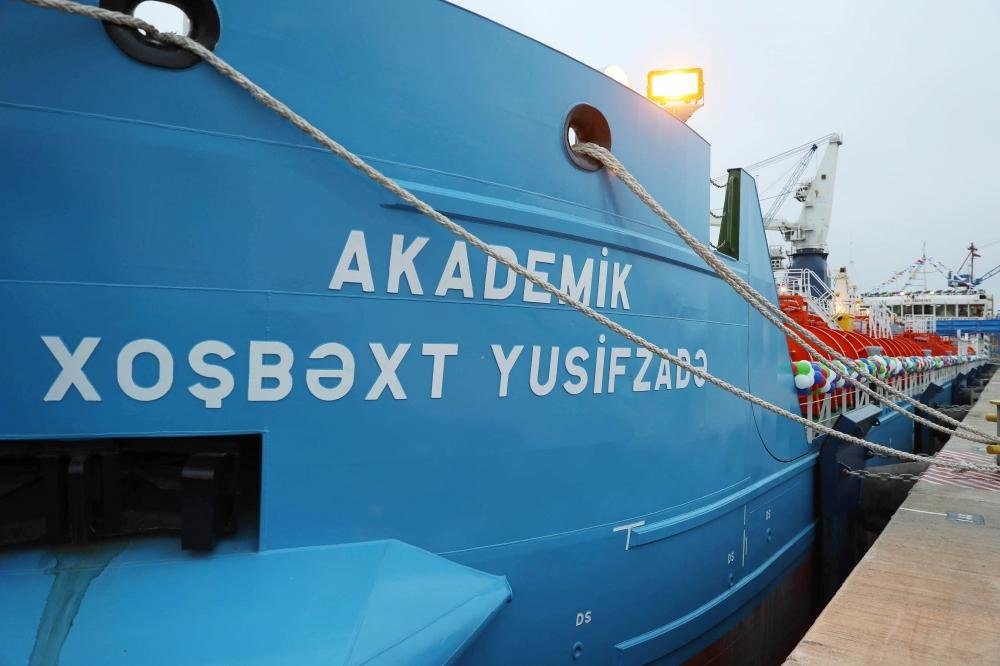 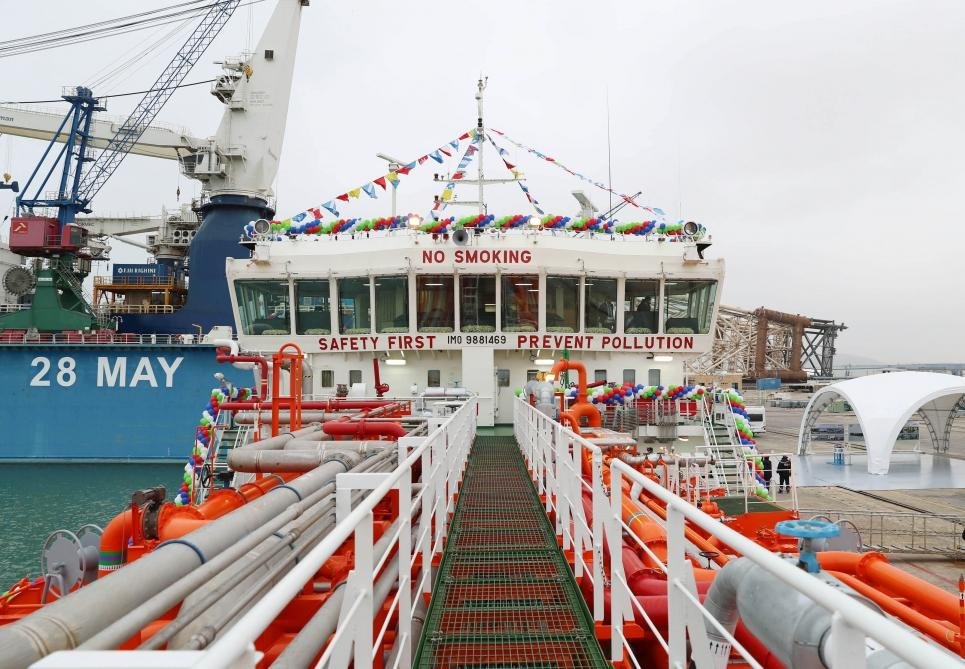 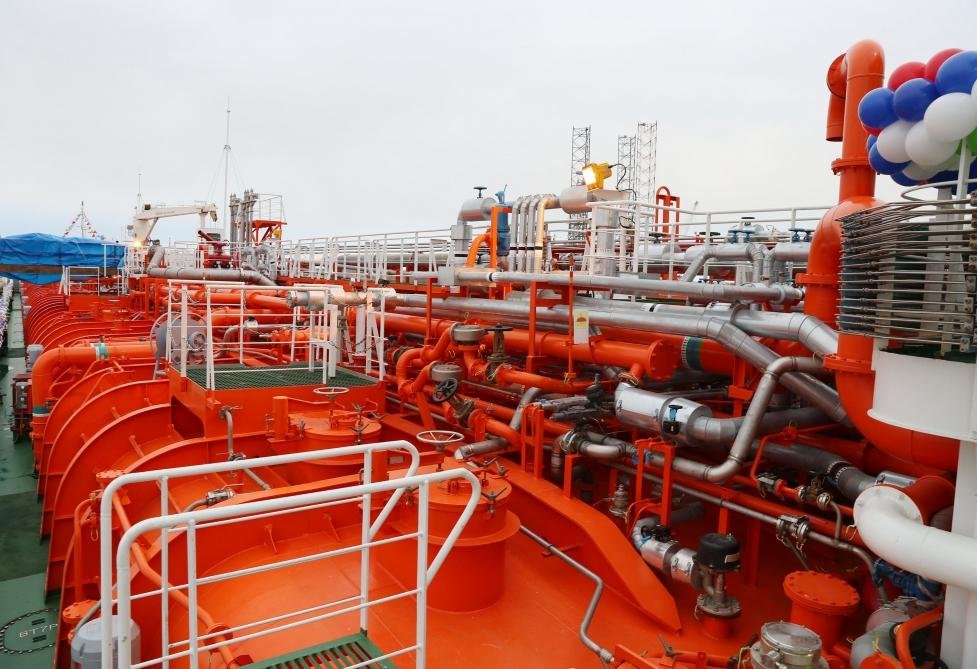 Historic crash for memory chips threatens to wipe out earnings

How US Abrams compare to Russia's T-14 Armata tanks

Andrej Babiš defeated: Is this the end of Czech populism?

How Peru's years of unrest culminates

Finland to stick with Sweden in NATO bid, hopes for green light by July

A guide by Mikhail Shereshevskiy

"Iranian authorities are behind attack on Azerbaijani embassy in Tehran"

Hungary, Austria not to send weapons to Ukraine

Social Democrats in the EP got rid of Eldar Mammadov